Intergenerational public space in Dublin – what we can learn from history 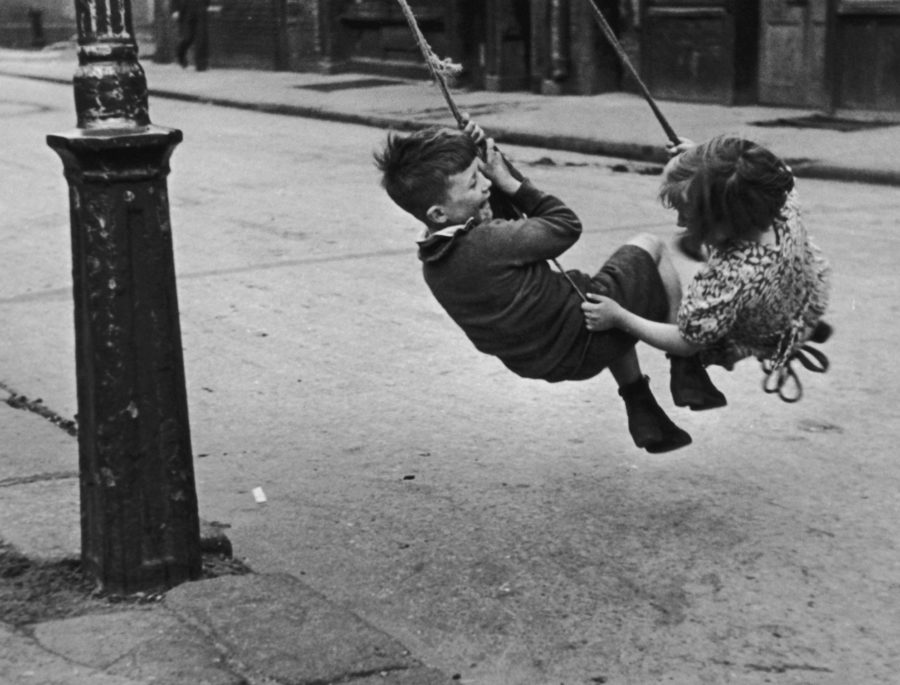 A blog by Ekaterina Tikhoniouk, Dublin.

“She was a good sport. I could be swinging on the lamp post or scutting the back of the coal lorry and she’d be sitting there at the window… or she’d come down and she’d sit on the step.”

– Anonymous Dubliner describing his neighbour in the 1960’s, ‘Heirlooms and Hand-Me-Downs’, Chris Reid, 2011

Until a few decades ago, both the physical and social environment of Dublin City, Ireland, gave children many opportunities for everyday contact with adults of all ages.

Many children spent their days playing in the streets and public spaces of the surrounding adult world as, physically, there was often little space to play inside their overcrowded housing. There was also much less motor traffic on the streets. Children’s presence in public space was also the norm, and adults largely tolerated sharing their pavements, streets and parks with lively crowds of unaccompanied children of varying ages. While my own research is based on Ireland’s capital city, Dublin, and its suburbs between 1920 and 1980, sources suggest that the above would have likely also been the case in other urban areas across Ireland, as well as other Western countries in this period.

Children were part of the adult world in Dublin – they watched, interacted with and were even occasionally scolded by surrounding adults. Childhood memories describe watching the delivery men unloading their carts or asking the bargemen for a bit of rope to use for skipping. Some of the adults, especially older generations, in turn watched the children’s exploits for their own amusement, sometimes asking a neighbour’s child to run an errand for them, or sharing stories of ghastly ghouls or of times gone by.

There are many things we can learn from these historical findings. This incidental everyday contact with adults of all generations often had real benefits. In her 1961 book ‘The Death and Life of Great American Cities, Jane Jacobs wrote, “Spaces and equipment do not rear children… only people rear children and assimilate them into civilized society.” The positive everyday interactions with adults on the street helped cultivate the children’s sense of worth and belonging. The older residents also benefited through reduced loneliness and increased community feeling.

These findings also highlight the importance of countering the trend of moving children into strictly-defined, fenced-off playgrounds, and designing multi-functional and multi-generational spaces that act as community spaces for both children and adults of all generations. For example, many of Dutch architect Aldo Van Eyck’s playgrounds, which were built between 1950s and 1970s, were fenceless and a part of the street life happening around them. Another much more recent example is the sloping ball fountain in the centre of Salzburg in Austria, which is situated in the middle of a busy pedestrian street. Playful urban spaces such as this illustrate how play areas can be designed as informal, flexible places that are a part of adults’ everyday urban spaces, resulting in age-inclusive spaces.

Lessons can also be learned from the older courtyard housing typologies found in Dublin’s inner city. Consisting of housing facing inwards onto a courtyard, they create a safe place for children to play, as well as encouraging interaction between neighbours. This typology could be used in modern middle-density housing developments, in estates intermixing family dwellings with smaller units for older residents. Forgoing a large back garden and facing back doors onto the courtyard could create a central communal space designed to encourage social interaction, for the use of children and adults of all ages.

Ekaterina Tikhoniouk studied architecture in University College Dublin and has a particular interest in the history of children’s play. If you grew up in the Dublin Region and would like to contribute to Ekaterina’s research about children’s play between 1920 and 1980, please email her:  ekaterina.tikhoniouk@hotmail.com.

You can read more about age-inclusive public space in the Chapter written by Danish architects Dominique Hauderowicz and Kristian Ly Serena on this topic in Intergenerational Learning in Practice: Together Old and Young (2019).