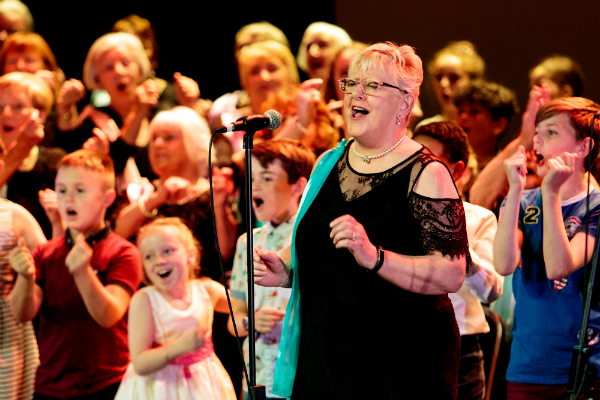 ‘If you can talk, you can sing!’ This is the motto of a new and innovative choir in Ireland that is doing a lot more than just creating a beautiful sound….

In a rural and sparsely populated area of north west Ireland, an intergenerational choir: ‘Choir of Ages’ or in the Irish language ‘Ceol le Cheile’ (Coming Together to Sing) has become a big success in the last year.

The mission of Donegal County Council’s Age Friendly Programme for the region was to promote the well-being of older people while helping them to feel socially included in the community.  The Age Friendly Strategy aimed to make Donegal one of the ‘greatest counties in Ireland to grow old in’.

The programme rolled out a number of projects including one aimed at bringing together two generations, old and young in order to build relationships between them.  These proposed projects centred on common interests of the two age groups – cooking, dancing and singing.

The Choir of Ages was met with huge interest by young and old, yet the organisers had many challenges to face in ensuring the success of the project. They needed to facilitate those living alone, in isolated areas, without mobile phones or email addresses to ensure they were able to fully participate. They had to elicit the support of parents and carers to travel with children and older people to diverse locations and to involve community organisations to provide transport and suitable practice venues.

Mairead Cranley of Donegal County Council, the founder of the choir, took inspiration from her own grandmother who thoroughly enjoyed music. Many of the older participants in the video, which chronicles the experience of the choir, specify the feeling of community and fun as some of the most important characteristics of the project. They also named confidence and friendship as important benefits. Children also referred to the fun and friendship they experienced. The choir has been meeting regularly and performed a public concert in July with a well-known Irish singer, Daniel O’Donnell.

As the choir director, Veronica McCarron, explains in the video, studies have repeatedly shown that choral signing is extremely beneficial to mental health.  Choral singing can improve the mood of people of all ages. A decrease in stress levels and the deeper breathing that is required in singing can have similar effects to meditation. Music making can even have healing power after a stroke, by assisting in the formation of alternative pathways around damaged brain tissues. Group singing is a non-intimidatory and participatory activity that promotes an atmosphere of solidarity and camaraderie.

The 120 participants of the Choir of Ages include children, teenagers and persons older than 55 years with the oldest member being 90! People of all races and religions, people with physical and psychological difficulties, dementia, loneliness, bereavement and loss of confidence have become involved. The project also includes a physical health element involving exercise routines as well as a purely social element with the all-important tea breaks.

While the choir has been successful in creating friendships within the different age groups by bringing people together who didn’t know each other before, the teamwork involved was also successful in creating friendships between the age groups.  Mairead explains that the children were not nervous of the older people and could appreciate them as helpful and caring people who had many years of experience to share.  The opportunity to share their life experiences also gives the older people a sense of purpose and the children in the choir help to energise the older people.

While at the beginning the older people and children worked on their singing separately, as soon as they began working together, they became friends and their growing connection and camaraderie is visible in the video. For some children, without grandparents, the older people they meet in the choir and subsequently interact with in their communities has become a very important outcome of their choral experience.