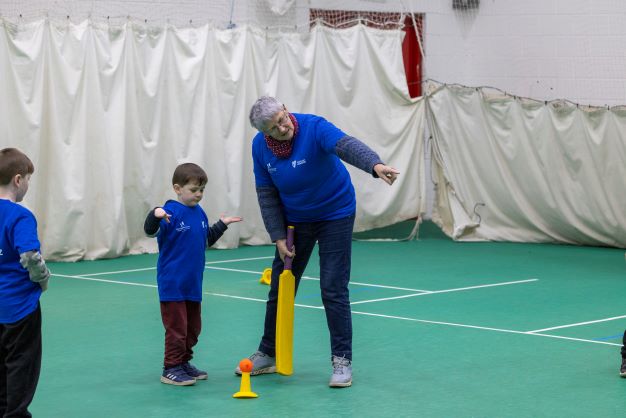 Ever thought about intergenerational cricket? This is the latest initiative of Fingal County Council in North County Dublin, Ireland. Read more about how it came about in this blog by Cathrina Murphy, Senior Community Officer.

Fingal County Council is proactively promoting intergenerational activities.  A few months ago, council staff participated in accredited training provided by Linking Generations Northern Ireland. This was one of the outcomes of a Masterclass on Intergenerational Practice that brought together experts in the field, including Dr. Carmel Gallagher, Dr. Anne Fitzpatrick, Ms. Vicki Titterington, and practitioners.

Every opportunity is utilised to promote intergenerational practice in the region. An informal chat between Cathrina Murphy and Naomi Scott Hayward, Cricket Leinster led to the idea of an intergenerational inclusive cricket initiative. Cricket is a sport passed from generation to generation, with parents and children often playing for their local club. Older and younger members often play together in teams with grandparents continuing their participation as spectators.

Cricket4All is a collaboration between Fingal County Council and Cricket Leinster and includes both table cricket and adapted cricket, which is played in the field, designed for people with disabilities. This new intergenerational initiative provides coaching for younger people with pan disabilities (physical and neuro diverse) in their schools and clubs around North County Dublin and for older people in cricket clubs. While some of the older people had connections to cricket clubs, the majority of young people had no connection. Cricket4All participants were recruited through a number of taster sessions which took place in community centres, cricket clubs, clubs for young people with disabilities and schools. The aim of the training was to develop intergenerational teams for competitions.

The Inaugural Fingal Cricket4All Competition took place on 19th November 2022. Three mixed age and mixed ability teams competed against each other with Team Red declared the winners. The day was very relaxed and although some of the younger participants found the noise level difficult at times, it didn’t interfere with their participation or enjoyment. The Mayor of Fingal, Councillor Howard Mahony was on hand to present the prizes.

The traditional “cricket teas” that followed the competition was a chance for participants and parents to chat with valuable cricket advice being passed on from the older participants to the parents and strengthening bonds between older and younger participants.

Cricket4All makes it possible for young people with disabilities and older people to participate in the sport of cricket in their community. This is especially important for these two groups who can experience social exclusion. Fingal County Council and Cricket Leinster are committed to continuing and growing this initiative.  The plan is to hold an annual Fingal Cricket4All Competition with participating clubs fielding their intergenerational team.